Some fellow Bloody Mary lovers over at Fix teamed up with Ghergich & Co. to create this awesome infographic to help you build the best Bloody Mary (there’s even a section on how to make a Bloody Mary bar). I wanted to share the infographic on Bloody Mary Tour for ya’ll to check out! It’s pretty sweet and my mouth is currently watering… Is it 5 o’clock yet?!

You can read the full “Bloody Mary Madness” article here. 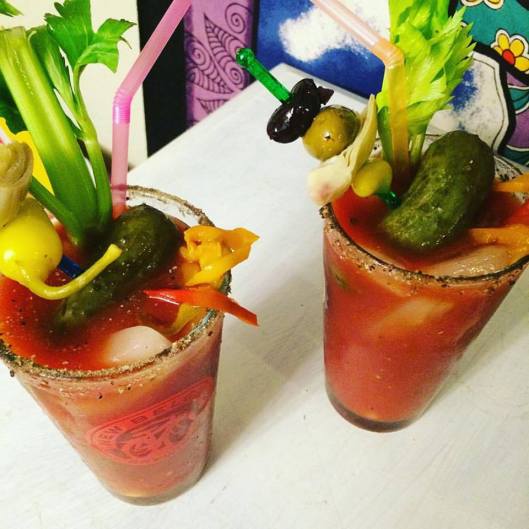 Happy Holidays from Bloody Mary Tour! I hope you all are having a great holiday season thus far and are ready to spend some cozy winter days with a Bloody Mary in hand 🙂 What better time of the year to make home crafted cocktails for your loved ones than the upcoming weeks. As we are coming to a close on the year of 2015, I chose to do a classic recipe involving all things briny and pickled. I also wanted to celebrate my 1K followers on Instagram (and of course my dedicated followers on this blog), so here is the 1K Briny Bloody Mary! Cheers!

My favorite part about this recipe is the use of my friend Morgen’s homemade pickle juice in the mix (and there’s a pickle in the garnish of course) to add a salty splash of vinegar to the 1K Briny Bloody Mary. Morgen made her own pickles about a month back and they are delicious. I’ll have to ask for her recipe soon so I can share it on Bloody Mary Tour. Of course, you can’t put Morgen’s pickle juice in the Bloody unless you personally ask her to make you pickles, but there are many close-to-homemade pickle brands that should do the trick (I LOVE The Real Dill’s varieties). In the Bloody Mary, I also dumped in a lot of different spices (as usual) and added some kick with my new favorite hot sauce– Marie Sharp’s Grapefruit Pulp Habanero Hot Sauce! This recipe is simple and can be crafted in under 10 minutes. If you like salty, spicy, and briny, this recipe is for you 🙂 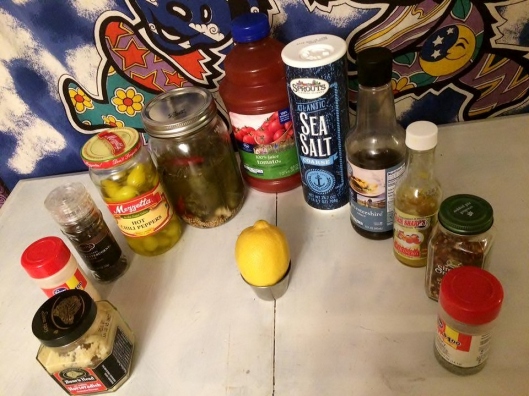 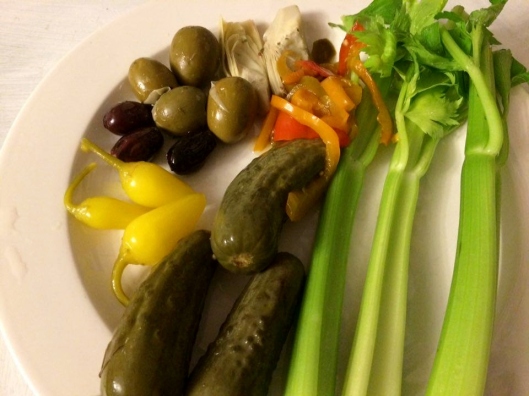 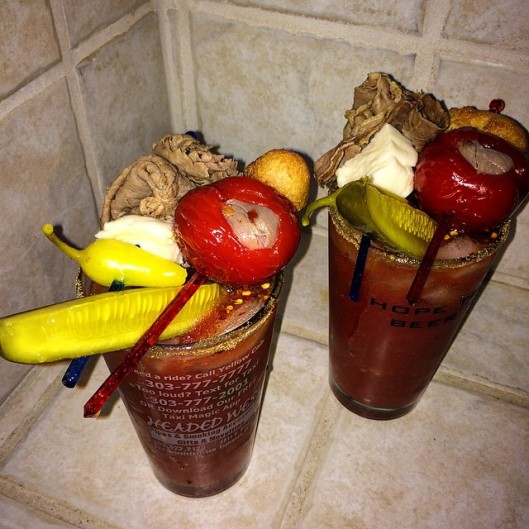 The Blackhawks Bloody Mary recipe is a tribute to the greatest hockey team in existence, the Chicago Blackhawks, and the greatest city in the world– Chicago. I grew up in the northwest suburbs of Chicago in a town called Lake Zurich. Although not directly from the city of Chicago, I frequented the city a lot and still do when I go back to Illinois. The style and culinary delights of Chicago are not contained in city limits, however; the reverbs of iconic Chicago are felt throughout the entire suburban area. Wherever you go in the Chicagoland area, streets are lined with hotdog, beef, and gyro places, along with your classic pizzerias. As a kid, Saturday afternoons were oftentimes spent at local hotdog and beef joints with my family– Tore & Luke’s, Portillo’s, Fratellos.. You name it! I always ordered a hotdog and fries. For the rest of my family, always Italian beefs. On weeknights when my parents didn’t want to make dinner, we ordered pizza. We usually got thin crust from Rosati’s, but ordered deep dish when we felt so inclined. I got so used to this easy accessibility of quick and delicious meals that when I moved to Colorado in 2010, I was seriously troubled. To go from having the best of the best for a low price to having to order a freakin’ sub for $9… Well, it was hard to get used to. Luckily, I made the discovery (thanks to a Chicago friend who also lives in Colorado) of a Rosati’s Pizzeria in the Denver suburbs! This brings me home. Most of our family parties throughout the years (even on Christmas!) always consisted of platters from Rosati’s— Italian beefs, baked mostaccioli, and fried chicken– so for my Blackhawks Bloody Mary, I was sure to include some delicacies from this treasured spot. 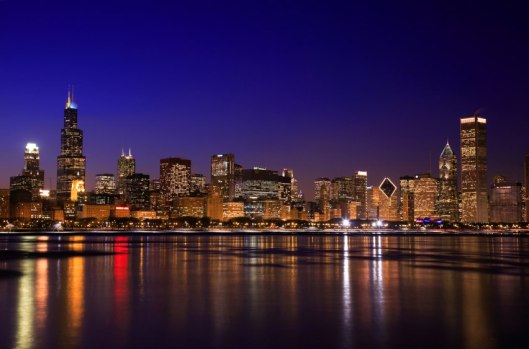 Chicago: the Best City in the World (Photo Source: Unknown)

The Blackhawks Bloody Mary brings together the tastes of Italian beef, Chicago-style hotdogs, and deep dish pizza (okay, and Chicago-style thin crust and stuffed pizza, too) so that wherever you may be, you can always have a taste of home. Italian beefs are believed to have originated in Chicago circa the early 1900s by Italian immigrant stockyard workers who got to take home the lesser cuts of meat. To create a more desirable dish, they slow roasted the beef and simmered it in a seasoned broth. Gaining popularity at large events like weddings in the 1920s, Italian beefs were then brought to the street by Pasquale Scala and friends, who built beef stands for the classic sandwich. The Italian beef is a dish closely associated with Chicago and is made from sirloin near the top or bottom round. The cut is slow roasted in a seasoned broth to produce a nice beef gravy (au jus) and then thinly sliced. After being sliced, the beef is reintroduced into it’s own au jus for hours to produce a delicious and moist final product. After the beef has soaked and has reached an optimum flavor, it’s placed in the middle of an Italian roll, which is dipped into the au jus to produce a nice, gravy-soaked sandwich. Not everyone dips the sandwich, but you’re missing out if you don’t. Lastly, giardiniera is loaded on top of the beef to add hot spice to each bite. Giardiniera technically is a bunch of pickled veggies in oil– such as sport peppers, celery, bell peppers, cauliflower, and carrots– and it is de-freakin-licious. For the Blackhawks Bloody Mary mix, I tossed in both au jus and giardiniera to give that full flavor effect of an Italian beef sandwich. I used a slice of Italian beef for the garnish, along with a prosciutto and provolone stuffed pepper (sometimes people put sweet peppers on their beefs!). 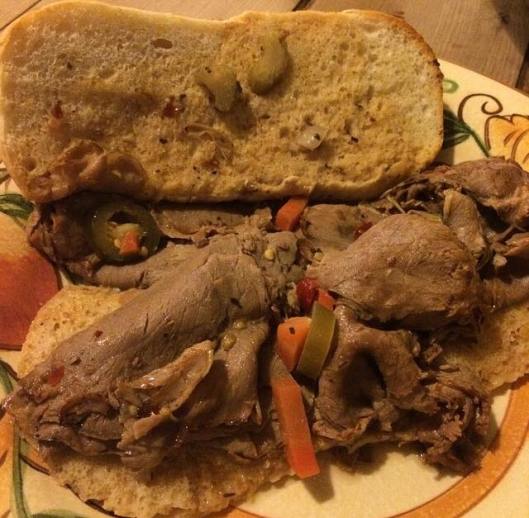 Chicago-style dogs are the best dogs around. They consist of an all-beef hotdog (Vienna beef, baby!) topped with bright green relish, yellow mustard, chopped white onions, a dill pickle spear, pickled sport peppers, tomato slices, and a little celery salt, all placed inside a poppy seed bun. And there is NEVER KETCHUP IN SIGHT near a Chicago dog. That is simply bad manners in the Chicagoland area. The Chicago-style hotdog is said to have originated during the Depression, thus being called the “Depression Sandwich,” at Fluky’s on Halsted and Maxwell (at that time, this symbolic “sandwich” only cost 5 cents!). In the Blackhawks Bloody Mary mix, I added celery salt and hot pepper juice (somewhat similar to sport pepper juice– I couldn’t find sport peppers out here in Colorado!). For the Chicago-style hotdog aspect of the garnish, I used a mini corn dog (I couldn’t find regular mini hotdogs at the grocery store, to my dismay), a pickle spear, and a hot pepper. 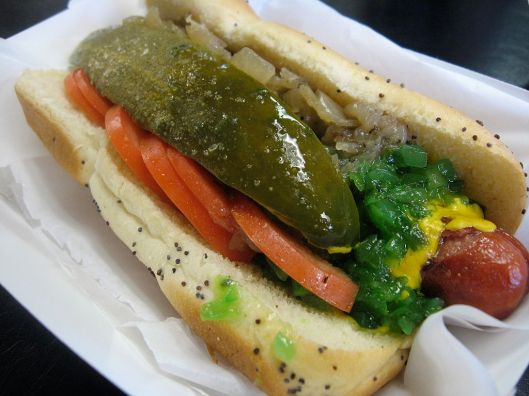 Lastly, Chicago is known for three different types of pizza: deep dish, thin crust, and stuffed. I love them all. Deep dish pizza or a “pizza pie” is assembled in the exact opposite way that you would assemble a regular, thin-crust pizza and literally looks like a thick pie. You put the cheese on top of the dough, the toppings (meat and/or veggies) next, and finish off with sauce. The crust is essentially not as thick as you would think it is, but the pizza as a whole emulates the deep dish image. Whenever you order a deep dish pizza, it comes unsliced so the flavor is locked in until consumption. The origins of deep dish are somewhat unknown, but the style is thought to have been created by Pizzeria Uno in the 1940s. Chicago-style thin crust pizza is a little different from New York-style thin crust due to the crunchy crust and comes cut into square slices (the “party cut”) as opposed to the pie slices I often see everywhere else. One time I even asked a pizza place in Colorado to do a party cut and even explained it to them… But my pizza came in pie slices. Maybe people outside of Chicago just don’t understand the party cut? Personally I think it’s a better way to cut pizza, but I’m not a pizza-maker…. Finally, we have the stuffed pizza. I used to get confused between deep dish and stuffed pizza, but Giordano’s clear execution of stuffed pizza exemplifies that the difference lies within the extra layer of dough placed on top of the pizza toppings before cooking (another layer of sauce is on top of this extra dough layer too!). This style is thought to be invented by both Giordano’s and Nancy’s Pizza in the 1970s. For the pizza portion of the Blackhawks Bloody Mary, I added red pepper flakes to the mix because who doesn’t put red pepper flakes on their Chicago pizza? I added a slice of mozzarella to the garnish. And you use tomatoes to make pizza sauce, so the tomato juice in the Bloody Mary was just a no-brainer 😉 — sarcasm, my friends. 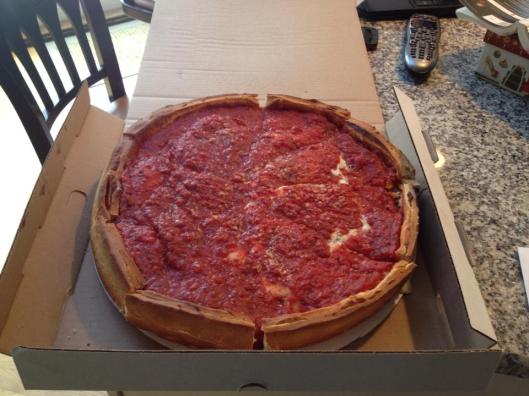 I am so thankful I was raised in such a mecca of culinary treats. If I wasn’t raised outside of Chicago, I don’t think my palette would be half of what it is today. In celebration of the Chicago Blackhawks playing in the Stanley Cup Finals, I have created the Blackhawks Bloody Mary recipe for all fans to drink in celebration. Whether you are in Chicago or far from the Windy City, this recipe will remind you of why Chicago is the best city in the world, where food, sports, and culture go hand-in-hand! 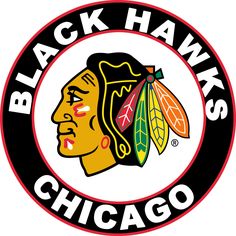 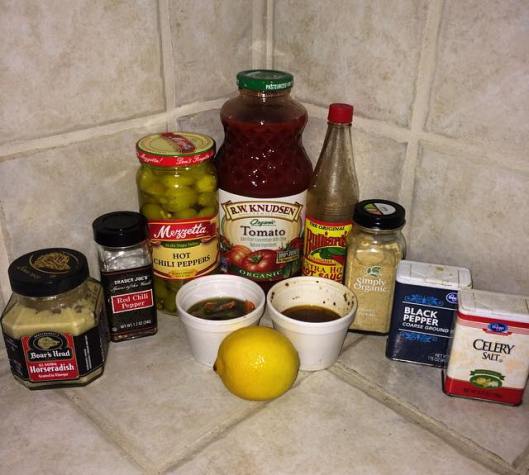 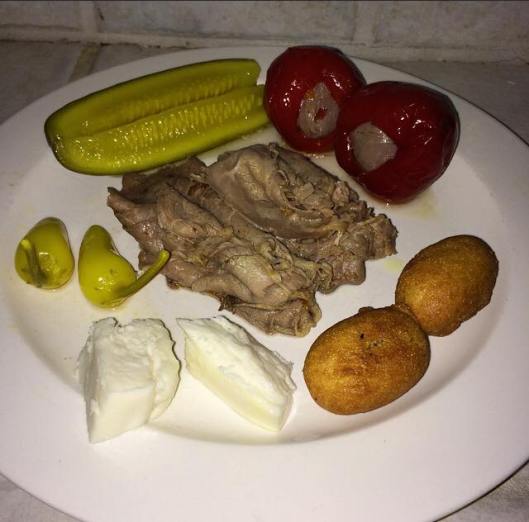 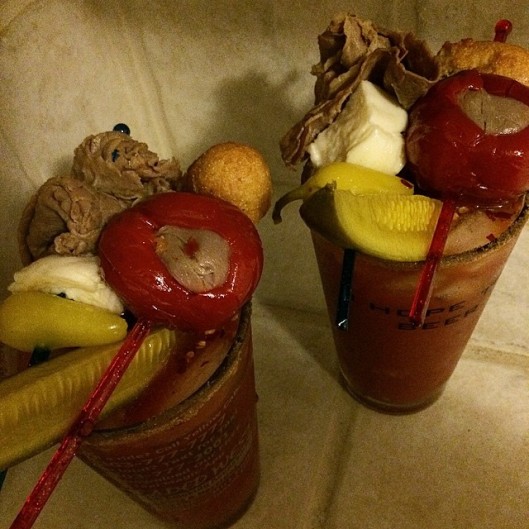