If you are following me on http://www.bloodymarytour.wordpress.com, please be sure to check out my new website at WWW.BLOODYMARYTOUR.ORG ! I used to have this URL directed to WordPress, but now I have changed web providers.

No new content will be posted on this website any longer, so subscribe to my new one via the email subscriber list. I feature homemade Bloody Mary recipes, Bloody Mary reviews, and much more. Hope to see you there!

Oh, the holidays. It’s that time of the year again! When you are working, commuting, and trying to balance some play into that repertoire, holiday gift shopping can be somewhat burdensome. Struggling with my own gift shopping this year, I thought I would create a mouthwatering list of 10 amazing gifts for the Bloody Mary lover in your life. I know I would happy with all (or any one) of these gifts, so happy shopping and happy holidays from Bloody Mary Tour.

Perfect gift for Bloody Mary lovers who like to make cocktails for all of their friends.

A unique garnish that is cute taboot and flavored with Cajun spices.

Instead of grabbing classic plastic straws for a gift, why don’t you gift these tasty beef straws instead?

Tried and true, these Bloody Mary mix kits only require you to add tomato juice, vodka, and ice. A great gift for the traveling Bloody Mary lover or someone who just wants to save space in the kitchen. 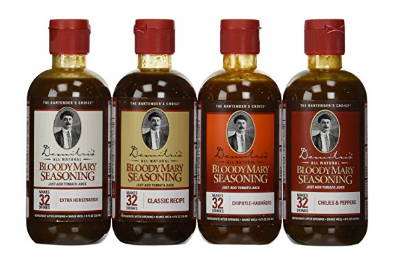 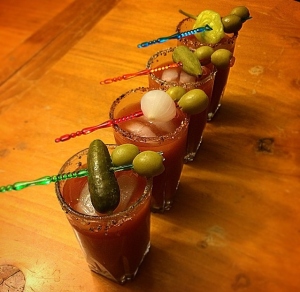 For the fashionable Bloody drinkers.

I just bought a pack of the wasabi candy canes to make a Christmas-themed Bloody Mary. These are a great gag gift, though I will be using mine in a future Bloody Mary recipe (stay tuned!).

A useful gift for all.

For bacon and Bloody Mary lovers alike, this rimmer is a tasty treat.

Note: This post contains affiliate links, but all opinions are my own.

The Bloody Mary Fest Denver took place last Sunday, October 23rd, 2016 at the EXDO Event Center in the River North neighborhood of Denver. The venue is great; it’s an open warehouse space with an outdoor patio for food trucks and sunshine. DJ LuvGroove was throwing down beats at the center of the venue to get attendees dancing and vendor tables were scattered about. I arrived early at noon for the VIP hour of the event, which was so worth it. We got to sample Bloodies and appetizers before the mad rush came in at 1 PM. Over 600 tickets were sold to the event, which is killer considering this is the first year the Bloody Mary Fest has been held in Denver. 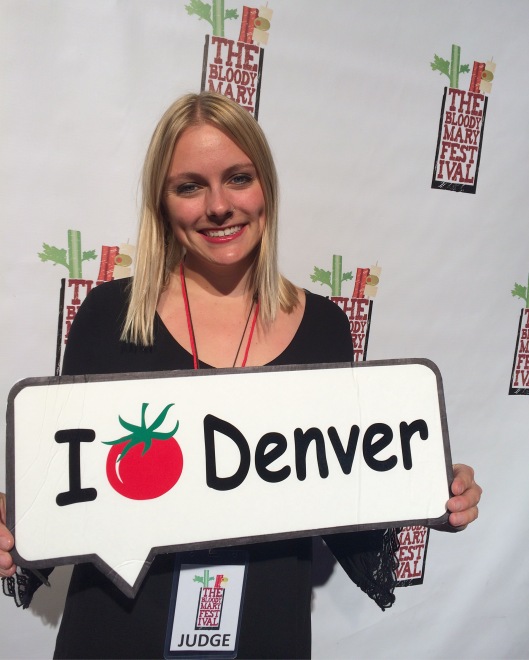 Since I was one of the judges at the event, the VIP hour was crucial. The judges’ scores had to be into the registration booth by 3PM, so the extra hour was imperative for trying all of the Bloodies without getting really drunk along the way (though I was definitely pretty buzzed).I judged alongside Shelley Buchanan, founder of the Drunken Tomato, and Shawn Ghani, founder of D’Shawns Fine Foods. We were tasked with rating each of the 11 Bloodies and determined the “Best Original Bloody Mary” and the “Best Traditional Bloody Mary.” The Original category was seeking the best mix with unique and unconventional ingredients, while the Traditional category was aimed at the best classic mix.

1st Place: A tie between Sassafras American Eatery and The District. Sassafras’s “Tale of the Pig” Bloody Mary was very unique, being made with pecan-smoked fresno chilies, roasted piquillo peppers, and house-made Carolina BBQ sauce. It was spicy and tangy, which led to complexity like no other. Sassafras also garnished their cocktail with delicious bacon and a deviled quail egg which they somehow deviled on the inside without actually splitting the egg. Freakin’ magic I tell ya.

The District’s Bloody was equally as tasty and made with fire roasted pureed peppers, wasabi powder, and pepperoncini juice, among more classic ingredients. The Bloody had an original flavor and was fiery hot! I really enjoyed the pop of spice and lingering heat on my tongue, which was complimented nicely by the andouille sausage and baby corn garnish.

2nd Place: Snooze an A.M Eatery won 2nd place for Best Original Bloody. Snooze’s Bloody was made with many non-traditional Bloody ingredients like beets and apple juice. This gave way to a very non-traditional Bloody Mary that reminded me more of a fresh-pressed health juice than a Bloody. One of the main bases Snooze used was cucumber water, which made for a refreshing cocktail. This Bloody was very “out there;” I actually drank about 4 of them because it was a great palette cleanser in between spicier Bloodies. 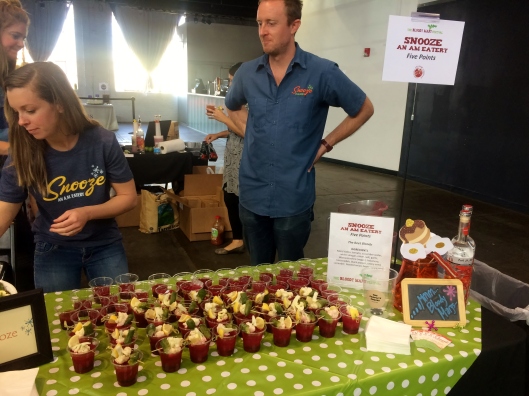 1st Place: Highland Tavern took 1st place with a unique, yet traditionally-flavored, Bloody Mary. I should say it was more of a Highland’s Tavern Bloody Caesar, since Clamato was used instead of tomato juice (I love Clamato). The use of pickle and olive brine, along with A1 steak sauce and an array of spices, made for a briny and tangy Bloody that was the real OG.

2nd Place: Fooducopia was 2nd in the Best Traditional Bloody category. Fooducopia’s Bloody was made with the most classic ingredients, leading to a crisp, salty, and mildly hot cocktail. The pickled horseradish rang through each sip, while the pickle juice and cayenne added a nice twist to the Bloody. Favorite part of this Bloody? The spices were really chunky and hearty. Bacon was also involved in the garnish.

People’s Choice Award was determined by the attendees at the Bloody Mary Fest. Each participant got one poker chip to vote for their favorite Bloody. The winner was Highland Tavern!

There were six other competitors in the Bloody Mary competition and they made some awesomely unique Bloodies as well:

Ace Eat and Serve: Really bold flavor with heavy notes of kimchi. Used Dimitri’s Bloody Mary kit in the mix, which is one of the best spice kits on the market! Loved the flavoring of this one.

Bacon Social House: Made with house-infused BBQ bacon vodka. Epic bacon. Hints of smoke and chipotle and made with pineapple juice, which added a unique sweetness. The bacon garnish was actually some of the best bacon I have ever feasted upon.

Denver Biscuit Co.: Made with Left Hand Nitro Stout, which was a bit overpowering at times. Very stouty, pickley, and briney.

Stoic & Genuine: Seafood-esque Bloody that gained some fishy flavor from the shrimp garnish. Spicy and tangy, with heavy notes of oregano and black pepper to make for a unique and complex cocktail (S & G’s Bloodies are pictured below). 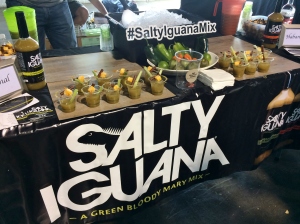 The Bloody Mary Fest Denver also featured a few Colorado Bloody Mary mix companies: Salty Iguana, The Real Dill, Bolder Beans, and Tru Pickles. One of the things I love about this state is that you don’t need to go far to find delicious homemade food and beverage items– there are so many in our own backyard!

I wanted to give a huge shout out to Evan and Yunna Weiss, founders of the Bloody Mary Fest! Thank you so much for the opportunity to work with the Fest and for bringing a highly sought-after event to Denver for the Mile High Bloody Mary lovers to socialize and celebrate. The next Bloody Mary Fest takes place in NYC this April. You can stay up to date on Bloody Mary Fest happenings here. 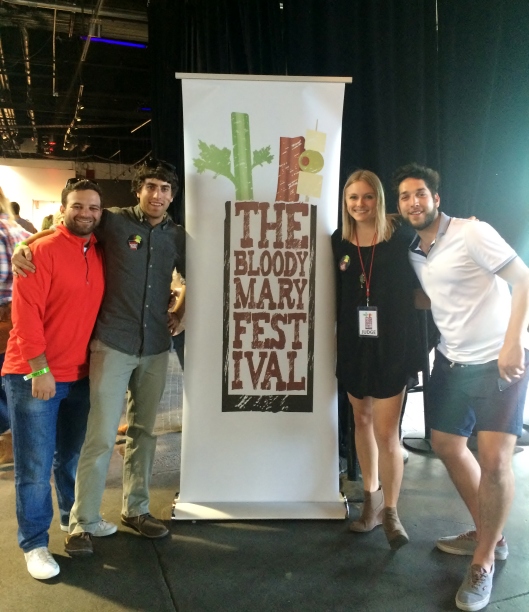